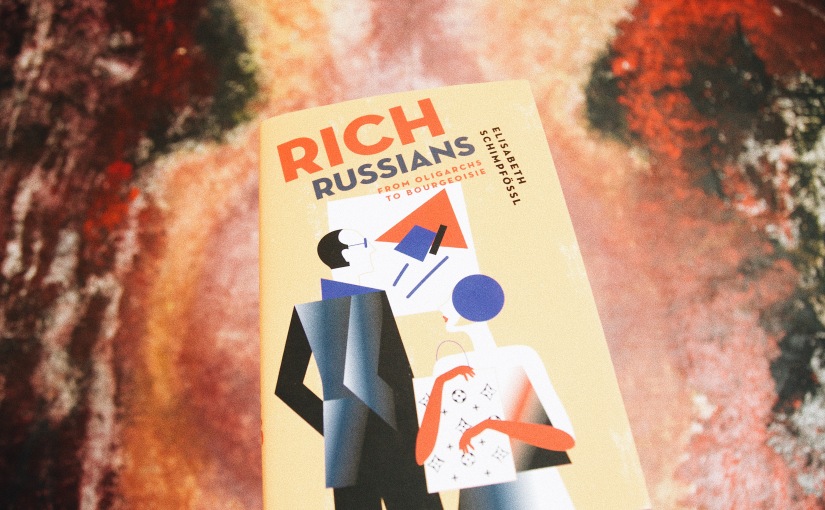 While I believe that it is right today to defend the Western liberal values, very much involving capitalism and free markets, also the big winners of the Cold War and the foundations for a New World in the 1990s, we should recognise that this very capitalism, if unchecked, may create aberrations that go against these very Western liberal values and may with time threaten their very existence. Liberalism and capitalism should go hand in hand. Sometimes they don’t, especially in chaotic environments like in the immediate post-soviet Russia when all had to be rewritten and rebuilt in no time with no local blueprint and where the fittest prevailed as they boldly took advantage of unusual situations and were just seen as a mere necessary evil in a vastly wider game.

This week I would like to talk to you about the rich – the uber-rich and more precisely of the Russian kind portrayed in the great book “Rich Russians” by Elizabeth Schimpfoessl, an Austrian author with great literary skills who wrote it after years of research as part of a post- doctorate fellowship at University College London or UCL, one of the great English universities today. She has taken a very academic stance for a research relying much on the Pierre Bourdieu and Max Weber of the discipline which makes her book very scientific in nature if only a tad pedantic at times.

I discovered the book thanks to the recent review by Max Seddon, the FT’s correspondant in Moscow (Well done and thanks, Max). I will borrow the opening joke from Max’s review that tells about two “New Russians” (as the rich were often called by us in the West) who meet and see they are wearing the same designed tie. “Ah” one brags, “I paid USD 500 for it”. The other guffaws: You fool! I paid USD 1000!” This was a joke depicting the oligarchs born in the nineties and who according to ES are now museum pieces even if we have other funny stories along the same lines. On the low scale of the “New Russian” stories and only a few years back the food and drinks manager of the most elite hotel in Prague was lamenting his cognac bottles were not selling at all. He then quadrupled the price with Russian guests suddenly not stopping buying them within a few days until they were none.

The book deals with the context for the rise of Russia’s upper class, then looks into a shift from crude consumption (which is yet a stereotype many in the West still have), the consolidation of social position and self-legitimation process (also for their children which deals with the passing of the wealth down generations) like what the bourgeoisie did in the West. ES narrates the elite’s path to riches and the quest to seek distinction in terms of family history and lifestyles. The middle section deals with legitimacy that demands the practice of philanthropy and yet the justification of a pronounced social inequality and patriarchic norms. ES finally looks into the future of the Russian bourgeoisie looking at the transfer of wealth to the next generation all against a backdrop of tangled relationships with the West which is an issue as most New Russians live in the West and London(grad) especially (the Salisbury poisoning event being the latest issue that this Russian group had to deal with due to their choice to live in London). ES has interviewed about 80 so-called oligarchs for her book which makes for a very interesting journey into the life of those powerful men (they are all men) we know and some other billionaires who escaped the limelight. There are indeed stories about colourful mavericks and the associated long yachts, latest fast cars and uber-flats in London, villas in Saint-Tropez and same evening “in and out” flights to and from Chamonix for “memorable” parties.

“Many of those leading the Soviet system vanished while strangely those just below, far less visible publicly but very connected and agile, were very successful in taking over”

Those new Russians came into extraordinary wealth at a time of unprecedented economic and social changes previously led by the collapse of the Soviet Union, an event that we just barely came to understand in terms of magnitude and ramifications. The loss of empire led to Putin for restoration purposes but before we had both a land of chaos presided by Yeltsin and a land of unheard opportunity for riches created by a seismic power shift and related void. I lived through those times while working at the EBRD in London and covering Central & Eastern Europe from 1993 to 1998, including Russia at a time when jokingly the bank could have been called The Russian Bank for Reconstruction and Development so the needs were great and our full funding could have been absorbed by this one country even if it was a smaller version of its former self. It is clear that the most massive wealth transfer in history (was it a theft?) that created the “Rich Russians” was not a market event but one of grab with political backing, not only in Russia but in many countries in the region through the aggregation of privatisation coupons and other means. Did we and the West not facilitate this unprecedented state of affairs simply so we could stabilise new Russia and make it a Western market economy where all – and especially us – would benefit? (incidentally without paying attention to history and the basic need for national respect)

The collapse of the Soviet Union and the introduction of market reforms were extreme events in their harshness for the Russians and their living standards, something which was never fully grasped in the West so much we focused on the victory of democratic ideals and having vainquished the arch-enemy. Within three years, the “poor Russians” tripled in population with many in the Soviet intelligentsia being part of this expanding segment. Emigration soared. Male life expectancy went down to 57. Bubonic plague reappeared. Many of those leading the Soviet system vanished while strangely those just below, far less visible publicly but very connected and agile, were very successful in taking over. At the same time, “New Russians” (novye Russkie) emerged, accumulating great wealth and looking like the old caricature of the tasteless tycoon capitalists who throve in a “dog-eat-dog world, celebrating a new hedonism”. It was said that some entered politics, like in the reelection of President Yeltsin in 1996, primarily to protect their young and massive wealth (incidentally, of the six only one survived the new, cleansing Putin Siloviki – ex-security/military – leadership era that was fuelled by the oil boom). And the West helped (or did not oppose) that oligarchic drive as it could see it as a lesser evil to keep Russia from losing our recently acquired ways, not that it would have been a better option then. Today Putin has put the oligarchs in check lest they wish to suffer a dire fate and they do not hold any political power though need to support the regime and at times very personally suffer the sanctions post-Crimea annexion and Ukraine entanglement.

In 2013, post-financial crisis and as the oil slump hit, Russia’s wealth inequality overtook all the emerging markets in the world including Brazil, India, Indonesia or South Africa with Credit Suisse declaring it in its famed Wealth Management Report the country with the highest level of inequality in the world apart from some Caribbean nattions with resident billionaires. In 2014, Credit Suisse contemplated inventing a separate category for Russia so extreme had become the wealth inequality. Within two decades Russia had moved from being a country with relative equality to one where inequality had become far starker in 2017 than during the times of the Czars according to former FT Moscow correspondant and now Canadian Foreign Minister Chrystia Freeland. And in spite of this President Putin enjoyed an approval rating above 90% which was only recently dampened at 70% (which leader – think Macron – would not love this slump?) as he asked Russians to work longer to benefit from their public pensions in a country where age expectancy is still not attractive by Western standards.

ES dwells a lot on the fact that the New Russians in the 1990s did not inherit their wealth from a bourgeoisie class but are nevertheless in the process of becoming one trying to shed away the most abrupt and crass features of their image in the 1990s and 2000s to gentrify themselves. This is a process that can remind us of what America must have gone through with the famed robber barons of the mid-to-late 19th century who likely were close to our New Russians in terms of business practices, manners and ostentation – even if they were builders and developers creating the American Century more than mere asset strippers taking advantage of Russia’s rich natural resources. One notable common feature of power status was the “possession” and display at their arm of beautiful women (a hard statement to make today but one that sociologists will confirm). Those who became rich were in part the managers of the assets they privatised for themselves, this encouraged by the Russian reformers like Chubais and Gaidar around Yeltsin who focused merely on the macro-picture not caring (it would seem) for the emergence of a new class of super-rich privatisers and buccaneers. Many of these New Russians were also most often linked to the Intelligentsia (the thinkers) who may not have been top Communist Party members but were scientists or academics who also had worked at some point to enhance the power of the Soviet Union in areas deemed strategic to the leadership of the days. They were too young during the Soviet days to have been in senior positions in a regime that also naturally encouraged gerontocracy. Besides that, many were Jewish as can be seen from the roster of top oligarchs in the 1990s and even now as if they were barred from political leadership positions they were wanted as economic and scientific managers. The Intelligentsia was to them an alternative to an aristocratic ancestry and accelerated their journey to eventual “bourgeoisification” in a new Russia that was redefining the rules of the game as it went and by the economic sword.

ES believes that today the new Russian bourgeoisie wishes to be convinced that they deserve their position because of who they are and their superior qualities, the approval of their bourgeois peers being far more important than gaining legitimacy by society at large, which is a task that lies ahead for the second generation who is gradually coming of age. ES feels a move from crude ostentation to greater etiquette, a stronger family orientation, and some degree of modesty, philanthropy and patriotism (“they wish to collect paintings and not yachts” even if there was Viktor Vekselberg and his Fabergé eggs in the 1990s, which made him a stand out) which are seen as key also as Russia moves gradually to a post-Putin era.

I dedicate this note to my friend Dmitri, who has seen both “worlds” up close and is one of the few official and efficient, not to say low key, bridges between the West (particularly the U.S.) and Russia today in what is a challenging time for all of us. Men like him, who understand what motivates the Russian as well as the Western leaderships contribute to ensuring we talk and avoid escalation, working in the shadows, modestly and expertly. Bolchoi spasiba!