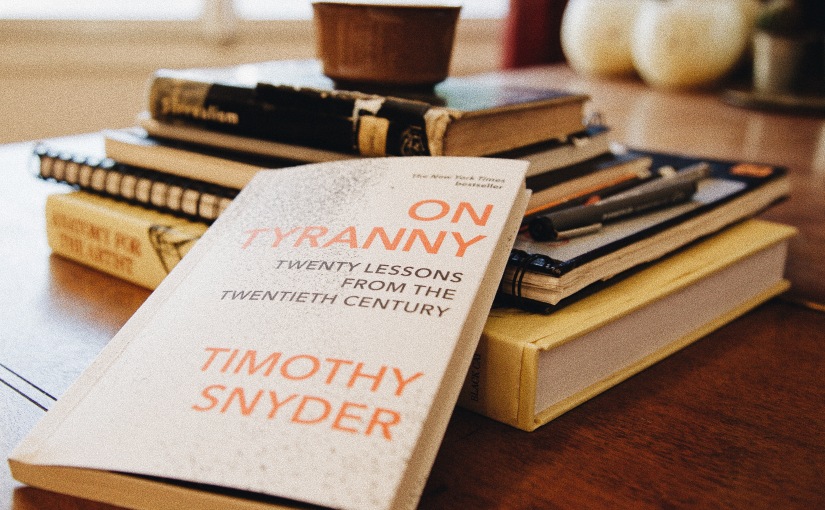 I wanted to come back to Yale’s Timothy Snyder who had written “On Tyranny”, again like Ed Luce and his famed “Retreat of Liberalism” in the aftermath of Trump’s election, in the face of the multiple rise of populism across the West. Snyder is the author of “The Road to Unfreedom” which he had written just before “On Tyranny” and that I already shared with you and has specialised on European history with a focus on central & eastern Europe, particularly known for its “Bloodlands” that won prizes worldwide. Snyder today, in his late 40s, is probably the leading rising historian at Yale.

I know it is the third book I tell you about coming from Yale. I want to stress that it is just because they tend to produce great books these days. Just to be clear, I like Yale and its prestigious history, Skull and Bones, the CIA’s cradle, Bill & Hillary’s nest, its beautiful colleges and campus, Papa John’s Pizza and my daughter’s alma mater but I remain a Harvard man as the young Frenchman who went there at 21 as an ESL student searching for a new life, drawn by a world with no limits, spending too much time at Yenching and going on to study history, economics and business (since 1981) even if never enrolling in any of the usual degrees in spite of once a very artful bid by the late and great Stanley Hoffman. I am actually looking forward to telling you about books coming from that other Cambridge on the Charles. And I am writing this so you all know where the historical roots of my fight and drive are located.

“On Tyranny”, which has a Clauzewitzian air, as John Lewis Gaddis, remarked too when he did his “On Grand Strategy”, that you know, is not a book in the strictest sens as it is more an essay of about 100 pages or, as a well-known thinker told me two weeks ago, a series of aphorisms that all of us should agree with. It is an enjoyable reading and is indeed short which also has its merits in today’s world. I actually think that, while everybody should read it, it is the perfect summer reading gift for your kids and/or grandkids from the time-, social media-, iPhone- and screen-constrained generations who may need some guidance on what actually matters. “On Tyranny” is a body of key precepts grounded in the history of the 20th century and addressing mostly but not only an American audience that are needed to maintain what we know as democracy and we should ensure does not lead to any perverted outcome resulting from the oft glorified will of the people, the latter who could so easily be led astray or lose their compass. Snyder offers 20 tips, guidances, tenets that we, as citizens should observe to ensure that (even if it does not say it as such) avoid the repeat of some of the key electoral outcomes we have seen, notably but not only in the U.S., since 2016. However more broadly the raison d’être of this set of aphorisms is so we avoid falling into what Madeleine Albright simply and rightly calls Fascism (a book I will come back to later and resonates to the Prague resident and lover of the Bohemian jewel I am.)
The 20 “lessons” (to take Snyder’s terminology) are:

1. Do not obey in advance (Most power of authoritarianism is freely given)

2. Defend institutions (as they are the guarantors of decency; select and defend one)

3. Beware the one party state (so support the multi-party system)

4. Take responsibility for the face of the world (Symbols do matter, notice the “swastikas”…)

6. Be wary of paramilitaries (that intermingle with the official police and military)

7. Be reflective if you must be armed (If you carry a weapon in public service, be ready to say no to irregular things)

9. Be kind to our language (Think up your own way of speaking; make an effort to separate yourself from the Internet)

10. Believe in truth (To abandon facts is to abandon freedom)

11. Investigate (Figure things out for yourself)

12. Make eye contact and small talk (Stay in touch with your surroundings, know the psychological landscape of your daily life)

13. Practice corporeal politics (Get outside; make new friends and march with them)

14. Establish a private life (Use internet and emailing but have personal exchanges in person)

15. Contribute to good causes (Pick a charity or two and set up Autopay)

16. Learn from peers in other countries (Keep up friendship abroad and make new friends)

17. Listen for dangerous words (Be angry about the treacherous use of patriotic vocabulary; be alert to “extremism”, “emergency”…)

18. Be calm when the unthinkable arrives (Modern tyranny is terror management with its resulting justified end of basic freedoms)

19. Be a patriot (Set a good example for generations to come)

20. Be as courageous as you can (If none of us is prepared to die for freedom, then all of us will die under tyranny)

Some points hark back to the rise of Nazism while others, that we can relate perhaps more easily, are more preventive in nature and easily applicable in our daily life. I always like the eye contact (be careful though!) and small talk and of course my 21st tenet…read books and discuss them. Each point is beautifully argued with live cases very often taken during the rise of authoritarianism in the 1930s in Europe.
It is a great set of recipes and we can all be our own chefs, putting the emphasis where we feel best. The meal will always be delicious.
And when (and as) we live in times that are upside down, please remember Nassim Taleb:“Tough times don’t last. Tough people do”.